This 3-part blog series is all about the advantages and challenges of starting a massage therapy career later in life. We’ll find out why it’s such an attractive career for people in their forties, fifties, and beyond and the special skills that mature students bring to the classroom. Today, we’re sharing the stories of some special Vicars graduates and current students who came to massage therapy as a second career. 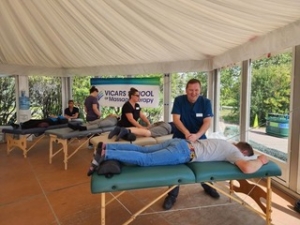 Elliott Lloyd treats a client at an outreach event during his second year as a Vicars student.

The link between a healthy body and a healthy mind is what drew Elliot Lloyd to pursue a career in massage therapy. He’d always been into sports, even signing up for an Ironman triathlon in his late forties. It was while training for that grueling race that he began getting massages, finding them an essential part of his regime.

After retiring from 30 years in policing, followed by a couple of related security and investigations jobs, Elliot realized he didn’t want to investigate anything anymore—he wanted to help people the way that his RMTs had helped him when he was training.

He graduated from Vicars in October—one of four people in their 50s in his class.

“I joined the police young, at 19, and while we had learning and courses in the police force, going back to school at 51 was hard work,” says Elliot. “But I’ve really enjoyed it.”

For him, the key to successful learning is staying organized to deal with the course load and to keep the stress levels down. And his life and career have given him plenty of practice in that department.

“After the stress of policing, I find working one on one with somebody to help them relax or resolve a therapeutic issue—in a nice quiet room with music in the background—is almost as therapeutic for me as it is for them,” Elliot says.

Elliot has found that his life experience in policing, particularly in communicating with people, translates directly into massage therapy.

“I feel that when I’m dealing with someone in a student clinic, I’m probably more comfortable than someone who is maybe 19 or 20,” he says. “Having a lot of experience in listening and figuring out how people tick is really is the key to massage therapy.”

The idea of being a mature student gave Sheryl Moroziuk a lot to think about.

Sheryl had left her engineering job to care for her children when they were young. Once they’d reached school age, she didn’t want to go back to her old job. She was 37 years old, restless, and wanted a career where she could make more of an immediate difference in people’s lives. An earlier interest in physical training and body building led her to consider massage therapy, and to attend an open house at Vicars’ Calgary campus in 2017. She was intrigued—but the doubts lingered.

“I had a lot of concerns ranging from potentially being the oldest in the class to the transition in my own identity where I might be working on former colleagues or neighbours,” Sheryl says.

Nonetheless, she enrolled and was relieved to discover that many of her classmates were around her age. And once she got back into the rhythm of school, Sheryl found her age was not a hindrance but a strength.

“As a mature student, I had my priorities in order,” she says. “With kids and a family, you don’t have a lot of time to waste.”

A few months after she graduated in 2019, Sheryl was diagnosed with rheumatoid arthritis. Rather than letting it be a setback, she decided to view it as another opportunity to turn her own life experiences into professional strengths.

“When you’ve experienced the limited range of motion and lack of mobility that older clients go through, it makes you more empathetic,” she says. “You do more thorough assessments of clients and you have a lot of wisdom to incorporate into your practice.”

Sheryl has a mobile service with a full client base, and fills in for other therapists in a few clinics in her area. She loves the flexibility and freedom to choose her own schedule.

“I’d worked at a lot of different jobs, hoping to contribute and have a purpose,” says Sheryl. “Massage therapy has been the longest running interest of mine and it’s still going strong.”