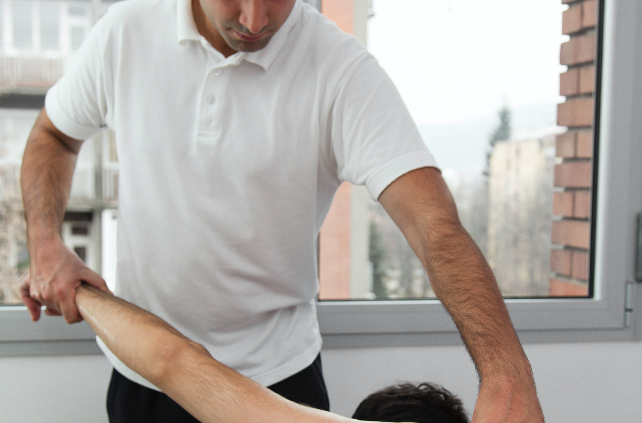 If you do a quick online search for registered massage therapists in your area, there’s a good chance that most of the names that come up will be female RMTs. And if you’re a man interested in a massage career, you might end up wondering: Is there room in this profession for me?

The short answer is: Yes!

The long answer is: Yes, as long as you’re not afraid to work hard, blaze your own trail, and stomp on a few outdated stereotypes while you’re at it.

Why aren’t there more male RMTs?

Male and male-identifying RMTs are practicing in every area of the profession, in every type of clinic environment—and they’re thriving.

But they’re still a minority. In Canada, about 15 percent of practicing MTs are men. Here at MH Vicars School of Massage Therapy, the number is about the same: 17 percent of students in our last two graduating classes were men. For men who want to become massage therapists, that gender imbalance can seem pretty intimidating.

Why are there not more men in the profession? It’s complicated.The most obvious reason, of course, is that it’s a self-fulfilling prophecy. Most people have met more female RMTs than male ones, so if you ask them to picture an RMT in their head, they’ll probably picture a woman. This makes it harder for men to picture themselves as massage therapists.

Unfortunately, there are also plenty of myths and misconceptions about massage out there that actively discourage men from pursuing a career in this field.

Articles about opportunities for men in the massage business can make for discouraging reading. It’s still sadly common for commentators in industry magazines (most of which are American) to talk about hard it is for male grads to get clients.

But in our experience—and in the experience of our male graduates and faculty members—the reality is much more positive.

Mark Smith has a massage practice in Northwest Calgary and teaches first- and second-year at Vicars. He’s always excited to see male students in his classes, and to pass on the lessons he’s learned.

“What I tell the men in my classes is ‘Be patient’.”

When Mark first graduated from massage school, he worked in a spa in Whistler, BC.

“In a spa environment, it is a lot harder to be consistently booked. I would have maybe two or three massages a day while the women were fully booked.”

But his persistence—and his talent—paid off. Every appointment he had was an opportunity to demonstrate his skill, his education, and his professionalism. His clients would not only re-book, but they’d tell their friends. After a few months of proving himself and word-of-mouth promotion, he had built up a comfortable practice.

Mark later moved to Vancouver, where he worked in clinics that had more of a focus on rehab and sports medicine. He found this type of clinic to be a much more receptive environment, and he was able to build up his client list in no time.

Things went faster because he had fewer stereotypes and preconceptions to overcome. But at the end of the day the source of Mark’s success in Vancouver was the same as it had been in Whistler: He is a well-trained and effective therapist. He conveys by his actions and attitude that he is focused on making each massage a positive and safe experience for all his clients.

Will I have hard time getting a job as a male massage therapist?

Edmonton instructor Janine Borger has taught at Vicars for 20 years, and owned a busy massage clinic in Lacombe from 1997 to 2012. While she didn’t have very many men on her team, she says that it was only because there weren’t as many male therapists out there. There were fewer men graduating from massage schools back then, and even fewer of them wanted to work in small-town Alberta.

But Janine says things have changed a lot. Now there are many men who work as RMTs in Lacombe, including a man with a busy practice in a local spa where therapeutic massage co-exists with manicures, pedicures, and facials.

Janine has also watched as the numbers of men in her classes has steadily increased over the years.

“One class I had last year was actually half men and half women!”

She believes that the massage business is starting to be seen as a more valid occupation for men.

Public perception of massage has changed over the years, away from the sense that massage is just a relaxing indulgence. Thanks to an increase in standards of education for massage therapists (even in non-regulated provinces), massage therapy now has the recognition that it deserves as a valuable health care profession.

Things have changed so much that when David Galarza enrolled at Vicars, it didn’t even occur to him that he might face obstacles as a man in a female-dominated profession.

He had always loved giving massages, he says, and was completely focused on turning his passion into a career.

By the time he graduated 2019, he was prepared.

“It has been challenging, but not that bad. It is harder at first, getting new clients. There is [still] a stigma.”

David thinks he was lucky that his first job was in a busy clinic that happened to be owned by a man, so the clients were accustomed to a male RMT. A lot of the clients he saw there, and continues to work with, are living with chronic pain. He has positive results and is well accepted by these clients.

But his practice is not limited to athletes and rehabilitation. He has since opened an esthetics and wellness clinic, D&M Treatment, in partnership with an esthetician specializing in permanent makeup applications. He and another Vicars grad, Laura Dunlop, practice massage therapy as part of that “beauty-oriented” business. David also sees clients in his home studio, and has a mobile practice, taking his equipment to workplaces and family homes.

This has allowed him to work with young children and teens as well as their parents and given him experience in pre- and post-natal massage, both areas of practice that are included in the Vicars program .

What advice would David give to other men considering or starting out in a massage career? The same advice he would give to any new graduate:

“Be friendly and be kind. Stay professional and communicate well. Stay engaged with your client throughout a treatment. There is always an education component: walk them through the whole process of where your hands will be and why.”

What does the future look like for men in massage therapy? 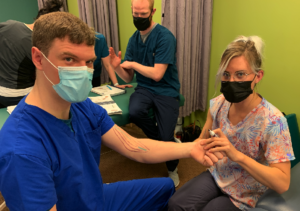 Vicars curriculum director Linda McGeachy says the greatest hope for growth in the numbers of successful and effective male massage therapists lies with the many men who are demonstrating that it can be done.

She points to colleagues who have earned the trust and long-term loyalty of their clients by the way they practice and the way they communicate. At MH Vicars School, we are proud that this group includes our own instructors, supervisors, and two decades’ worth of graduates.

If you want to help people get well and stay well, be your own boss, and never be tied down to a desk, massage therapy could be the career for you—no matter your gender. To learn more about this fast-growing career, contact our friendly admissions team by calling us toll-free at 1-866-491-0574, or sign up for a virtual open house!